Recycled water, sometimes referred to as reclaimed water, is sewage that’s been treated so that it can be reused, either industrially, in aquifers, for irrigation, or even to drink. The notion of drinking water which used to be sewage might seem disgusting, but it’s an extremely effective process and one that’s becoming more and more important as water waste becomes a more pertinent issue. 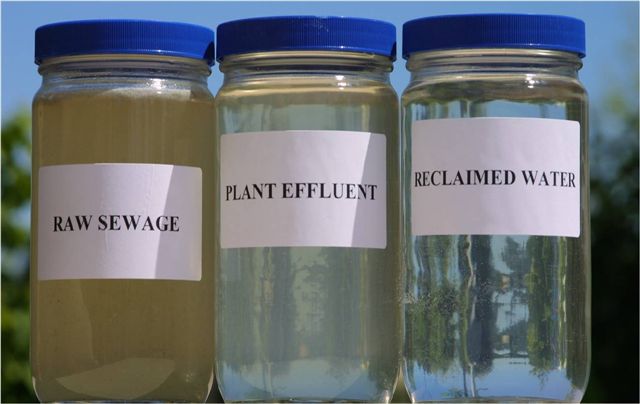 It’s no easy feat to turn once heavily contaminated water into something clean again; you need more than a beaker and a circle of filter paper. It varies from plant to plant, but there are a number of steps to the process. Sewage water is often referred to as blackwater, while the runoff from sinks, showers, baths, washing machines and the like is known as greywater, with the key distinction being that there’s no poop in greywater. Sorry, faecal matter.
Greywater is easier to treat, and with the right facilities it can even be recycled at home. It has to be used quickly though, as pathogens can develop in it if it’s left to stand for even a few days. It can be filtered biologically or mechanically. Constructed wetlands or garden walls can do the job, but if you want to do it on a smaller scale, you can use a membrane bioreactor. This is essentially a membrane which will not allow solids or micro-organisms through.
Speaking in mechanical terms, you can use sand filtration, lava filtration or a UV radiation system. With blackwater, things are bit different. The water is piped in through sewage systems and then treated at facilities, in 5 basic steps.
Firstly it goes into a primary treatment tank, where it will sit for 24 hours while a colony of bacteria develops and starts munching away at all the larger contaminant particles. Once settled, it’s pumped into a second tank where it will be aerated (churned up using air and water), separated from the sludge and finally clarified and chlorinated. It can then be used for ground irrigation.
There has been a lot of question about any health risk which might stem from using reclaimed water. Studies have shown that the biggest issue with reclaimed water is the by-products left over from the recycling process, chlorine in particular. It is generally agreed though that reclaimed water used for irrigation or agriculture carries no greater health risks than portable water.
Callum Davies
Callum is a film school graduate who is now making a name for himself as a journalist and content writer. His vices include flat whites and 90s hip-hop.