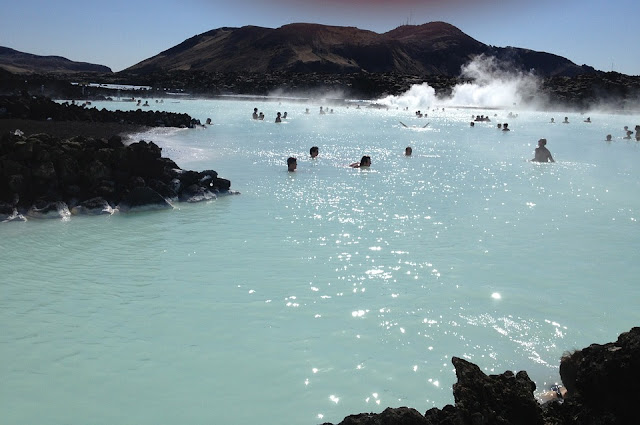 The Blue Lagoon is one of the most famous attractions in Iceland. If anyone you know has visited the country, on holiday or for whatever reason, chances are they took the time to swim in the Blue Lagoon. The warmth and clarity of the water, combined with the amazing surrounding views make it the perfect combination of serene and spectacular.
You would think, given that Iceland is riddled with volcanic hot-springs, that the lagoon is a natural phenomenon, but that isn’t quite the case. The lagoon is manmade, but it effectively happened by accident. In 1976 the runoff from the geothermal power plant started forming a pool, and a few years later people started bathing it, owing to rumours that the water had healing properties.
Going purely from that, it might sound like an unhealthy or even potentially dangerous activity, but it’s actually completely safe. The Svartsengi Station is one of 5 geothermal power plants in Iceland which use the abundance of volcanic energy on the island to generate electricity. Superheated water is vented from near a lava flow and then through turbines, generating 76.5 megawatts of energy. The water, meanwhile, is sent through a heat exchanger, generating a further 475 litres of hot water for a municipal heating system every second. That done, the water is fed into the lagoon.
No external, manmade chemicals ever come into contact with the water, it’s effectively just moved around. The water does, however, have a very high mineral concentration, which makes it impossible to recycle; it simply has to be reabsorbed into the local volcanic landscape. While it sits there though, it provides a warm, cleansing service to thousands upon thousands of tourists every year. The milky blue appearance of the water owes to the presence of silicate minerals, mixed in with sulphur, salt and various forms of algae, including coccid and filamentous blue-green, neither of which are found in comparable conditions anywhere else in the world. This natural cocktail has proven to be extremely dermatologically beneficial, especially for conditions like psoriasis. The silica mud is particularly good for this, but it is still not known exactly why.
It’s been suggested that the mud stimulates the extraction of keratinocyte from the skin, which directly influences skin barrier quality, which is reduced by psoriasis. The algae in the water have also been found to inhibit the expression of certain proteins through UV radiation. This is just the tip of the iceberg though, and it will likely be decades or longer before we fully understand the complex effects brought on by bathing in the light blue water.
For the past 22 years, a purpose built psoriasis clinic has been operating in the Blue Lagoon, and skincare products produced from the water and mud are also sold both locally and online. As far as the actual swimming area goes, the staff are militant about hygiene, making sure that all visitors shower before and after bathing, monitor the water, send off quality samples and post the most recent results on their website.
Callum Davies
Callum is a film school graduate who is now making a name for himself as a journalist and content writer. His vices include flat whites and 90s hip-hop.