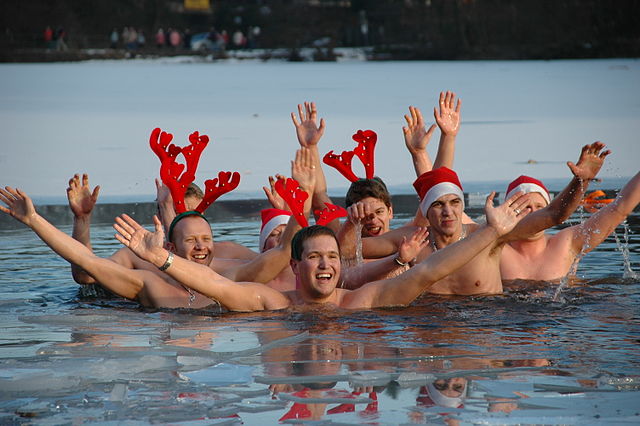 Typically, warm water is considered the more therapeutic option, while cold water is thought to be, well, dangerous. Even when you’re not danger of getting hypothermia, jumping into a lake of cold water sounds like the absolute worst thing, but it can actually be a safe, healthy pastime.
Cold water swimming is said to be good for blood flow, boosting your immune system and even improving your sex drive. There’s little in the way of scientific weight to these claims, just anecdotal examples, but one thing is for sure – with so many people swearing by it, there must be some benefit.
Numbers for winter swimming events have continued to climb with each passing year, and there’s even talk of the ‘ice mile’ ice swimming event eventually being included in the Winter Olympics. There’s obviously some level of risk involved, under the wrong circumstances you might be in danger of hypothermia or even drowning, which is why cold swimmers only do so in groups, and with plenty of safety measures on hand.
The actual reaction, known as the ‘cold shock response’, is actually one of the main draws of the activity, as it ushers in a boost of endorphins, and a subsequent increase in energy, which is why many people opt to take a cold water dip first thing in the morning. Much like free diving, cold water swimming is thought to awaken certain impulses in the body which usually lie dormant, but can allow us to withstand things which might seem too extreme to tolerate.
In the most basic sense, repeated exposure will gradually create a tolerance to the low temperatures, while the supposed benefits remain intact. It’s recommended to start during summer, and make it a regular thing from the outset for this reason. It’s also advised to consult a doctor before actually starting, and to avoid it altogether if you have any kind of heart condition.
Callum Davies
Callum is a film school graduate who is now making a name for himself as a journalist and content writer. His vices include flat whites and 90s hip-hop.