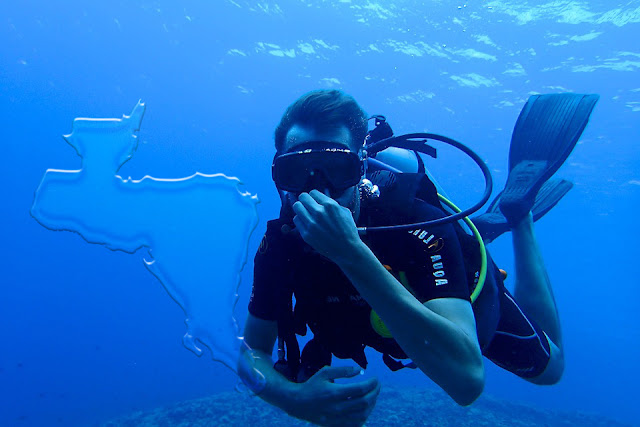 It would be a total disservice to Central America to place it in the same category as the rest of North America for diving. They are almost two different worlds. This short little band of land which millions of years ago connected the two Americas has its own climate, and lively, rich coastal activity. It’s long been recognised as a hidden gem for diving, and in recent years it’s only grown more popular.

The Big Scare – Costa Rica
The Bat Islands sit some 45km north-west of Playas del Coco on the north coast of Costa Rica. They are part of a sizeable marine reserve, and the diving season runs from May until September. The dive site itself drops to about 30 metres and there can be a strong current, so beginners may want to reconsider, but for those bold enough, it’s an incredible dive. The coral is minimal, and fairly unremarkable, the real draw is the group of massive bull sharks which frequent the area. These huge predators are a marvel to dive with, and on a good day you’ll likely also encounter manta rays, sailfish and perhaps even a whale.
Mary’s Place – Honduras
The Bay Islands offer the best diving of anywhere in Honduras. Utila has a number of beautiful spots, like the Black Hills seamount and Duppy Waters, but it’s Roatan which hosts the crown jewel. Mary’s Place can be identified by the huge rift in the coral wall, caused by volcanic activity. As well as diving into and through the chasm, you can swim around the perimeter, which is teeming with big sponges and fan coral. When the sun hits the chasm, it lights up in an unparalleled display of marine colour. Your typical roster of coral fish are in residence, as well as groupers, stingray, octopus, flutemouth fish and various weird and wonderful nudibranchs.
Hannibal Bank – Panama
Until 2004 Coiba Island was home to a prison with a rather nasty reputation. Tales of murder, torture and general awfulness kept locals from venturing anywhere near the island, but since closing down, the area has become one of the most verdant national parks in all of Central America. There are numerous dive sits around the island perimeter, and it’s one of the best places in Panama for diving with pelagic fish. This is especially true of Hannibal Bank, a 46 metre deep drift dive through one of the most popular mating grounds on the pacific coast. Huge schools of jacks, snapper and eagle ray are in abundance here, and as such, they attract predators, most notably hammerheads and black tips. You may even see a tiger shark, on a good day, and if the waters are calm, you can sometimes hear the distant singing of the humpbacks.
Blowing Rock – Nicaragua
Slowly but surely, the Corn Islands are becoming one of the most desirable diving destinations in the Caribbean. The reefs are unbroken, coated with rarer corals like elkhorn and staghorn and a remarkable abundance of larger fish like grouper and sharks. Little Corn is the more popular of the two for diving, despite being relatively underdeveloped on the land. There are numerous spots to see eagle rays, nurse sharks and hammerheads in the shallows, but about 17 miles offshore lies Blowing Rock, a volcanic pinnacle which plays host to all the life you’d find back towards the coast, but almost universally in greater numbers. You’ll see lobsters traversing the sea floor in little groups (or ‘risks’), sea turtles, barracuda and the occasional bull shark.
Lake Coatepeque – El Salvador
Gopro: Diving at Lago de Coatepeque from Max Miron on Vimeo.
There are plenty of coastal diving opportunities in El Salvador, but further inland a unique, fascinating alternative is available. There are two huge volcanic lakes – Ilopango and Coatepeque, which offer a completely different kind of diving. Coatepeque is the older of the two, having formed around 10,000 years ago, and it’s the better of the two for visibility and accessibility. Once you’re down there, the main draw is the presence of bizarre, fascinating volcanic rock formations, this includes various fumaroles and hot springs. Being that it’s had longer to settle, Coatepeque is also teaming with life, including zebra fish, catfish and guapote
Callum Davies
Callum is a film school graduate who is now making a name for himself as a journalist and content writer. His vices include flat whites and 90s hip-hop.