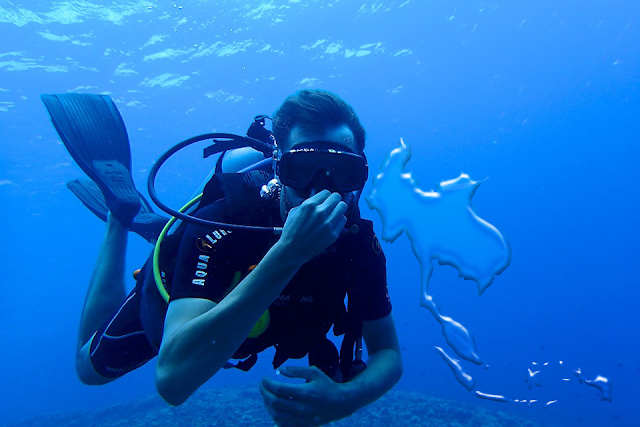 So, one portion of the enormous, incredible mega continent that is Asia is covered; it’s time to shift our focus over the south east. Southeast Asia is built up from Thailand, Vietnam, Malaysia, Cambodia, Myanmar, East Timor, Indonesia, Singapore, Laos, the Philippines and a number of smaller subdivisions. It is also considered to have some of the richest diving anywhere in the world.
The prevailing tropical climate, huge belts of islands and the presence of the Indonesian throughflow current have collectively resulted in the highest level of marine biodiversity anywhere on the planet. For this reason Southeast Asia, and Indonesia in particular, is Mecca for the diving community, an astounding cauldron of coral, fish and other marine life that simply has to be seen to be believed.
Hin Muang (Purple Rock) – Thailand
Hin Muang is one of a pair of diving sites on the outer edge of Mu Koh Lanta Marine Park. The other is Hin Daeng (Red Rock), which is by all rights just as impressive, but Hin Muang edges it out because it also happens to be the highest vertical wall in Thailand, carpeted with soft coral, anemones and various crustaceans. Swimming in the vicinity, you’ll find grey reef sharks, leopard sharks, mantas, octopus, banner fish and much more. It’s also far less crowded than Hin Daeng most of the time, so you can expect a relatively serene dive.
Nudibranch Gardens – Vietnam
This is a relatively shallow, beginner-friendly dive, only going as deep as 10 metres, but it’s an essential one. Nudibranchs are a form of mollusc, differing slightly in taxonomy from a sea slug, and famously colourful. There around 2,300 known variants and they’re all beautiful. As the name suggests, this site on Phu Quoc Island is teeming with them, along with bamboo sharks, crabs and some other small fish. Visibility can be a bit dim, but the site is so easy to access and so shallow that it works as a great introductory dive before exploring the further reaches of the reef around Phu Quoc.
Condor Reef – Cambodia
Condor Reef is situated 30km south of Koh Sdach. It’s a gorgeous maze of bizarre rock formations which almost look man made, including peculiar rivets and archways. It’s dotted with Chinese wrecks, long since raided and ripped apart by treasure hunters and coated with coral. The visibility is the best of perhaps any dive site anywhere in Cambodia, averaging between 16 and 20 metres, but reaching 40 on a good day. Turtles and sharks are a frequent sight there, and whale sharks are regular visitors, which is an experience in and of itself.
Sabang Bay – The Philippines
Puerto Galera is supposedly the oldest diving coast in The Philippines, named for when it was frequented by Spanish galleons plying their trade. There are a number of vibrant, fascinating sites around the area, and Sabang Bay is perhaps the best. There are 3 wrecks, a steel yacht and two wooden boats, in varying states of oceanic consumption. All 3 play hosts to a lot of small damsels, surgeon fish and butterfly fish. Various camouflaged bottom feeders also hang around the area, and beneath the wrecks there are morays, snake eels and the utterly weird looking stargazers. A view rare types of pipefish like the robust ghost and ornate ghost.
Tanjung Kopi – Indonesia
Most of the insane biodiversity that makes diving in Southeast Asia so famous is in Indonesia, and the huge Bunaken Marine Park is considered to the be the best scuba location in the entire world. There are dozens upon dozens of sites, each with their own unique appeal, but Tanjung is particularly special because it’s a 5-30 metre slope which ends in an 80 metre drop off, an astounding sight. Currents are kind of strong, so it’s a case of finding something to hold on to, and then enjoying the show. Shoals of batfish, jacks and trevallies ripple around, attracting the attention of blacktail barracuda. Lower down, colourful reef fish and crustaceans are plentiful, as are larger pelagic fish like black tip reef sharks, eagle rays, Napoleon fish and even hammerheads.
Callum Davies
Callum is a film school graduate who is now making a name for himself as a journalist and content writer. His vices include flat whites and 90s hip-hop.