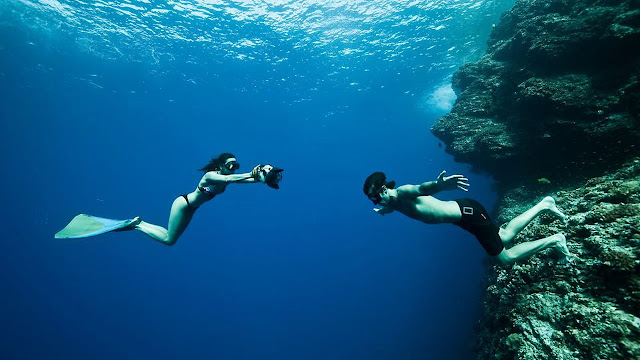 Do me a favour, stop reading this for a second, go into your bathroom and fill your sink. Once that’s done, hold your breath and stick your head in, then hold it there for 30 seconds to a minute, however long it takes before things get uncomfortable. Pretty unremarkable, isn’t it, just gives you a damp head. Well, what if I told you that you just activated parts of your DNA which developed before human civilisation had even come into being?
Freediving is fast becoming the big name in aquatic sports, and it’s easy to see why. The level of physical endurance required to do it is literally breath-taking. In 2007, Herbert Nitsch made a weighted descent down to 214 metres below sea level, using nothing but a weight belt, an air-filled balloon to lift him back to the surface, and his own lungs. 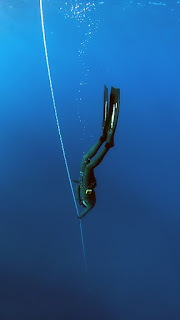 You might wonder how a human being could even survive at such extreme pressure, but even as we first submerge ourselves in water, the process begins. Slowly but surely, your heart rate slows, the walls of your lungs shrink and harden, your chest cavity shrinks and eventually your body becomes so dense that it achieves negative buoyancy. This capability is present in all of us, and harkens back to times primeval.
In theory, our astounding ability to slow our heart rate to speeds which would land us in A&E if we were at the surface are a result of latent reflexes which were present when natural selection required us to slow our bodies down, either to stave off cold, navigate a constricted birth canal, or, yes, deep dive.
The moment that signals you to take another breath might feel like an imperative, something which you have to adhere to, but it’s not, you can move past it. That is what freedivers do. Once you’ve done that, the diaphragm will actually begin to contract and release at intervals, along with a feeling of the world almost slowing down, a kind of focused serenity.
Doing this, freedivers have been able to stay under for as long as a staggering 22 minutes without coming back up for air, a feat previously thought to be scientifically impossible. ‘Boyle’s Law’ even originally stated that no diver could withstand pressures past 100 feet below sea level.
A series of increasingly deeper freedives, combined with scientific research in the 60s and 70s painted a very different picture. As previously stated, our heart rate begins to slow the moment we’re even partially submerged, a mechanism which had only previously been observed in aquatic mammals, the ‘dive reflex’. It was also observed that the peripheral arteries would close up to conserve oxygen for the rest of the body, known as vasoconstriction.
The most amazing thing is just how much blood can be transferred from other parts of the body and towards reinforcing the lung walls against pressure. The lowered heart rate and constricted vasoconstriction could perhaps be applied to other extreme circumstances the body might have to cope with, but it’s hard to think of any other scenario where this would be needed. Similarly, it’s recently been found that the spleen is also active during diving, releasing more oxygen into the body as needed. The spleen is normally dormant.
Once again, these traits are present in all of us, they have been observed to great extent in babies, but beyond that freedivers are the only people who really utilise them. Does this mean we could all live underwater one day? No, but it aptly demonstrates that the human body is far more adaptable to water than it appears to be, and that we’ve barely scratched the surface.
Callum Davies
Callum is a film school graduate who is now making a name for himself as a journalist and content writer. His vices include flat whites and 90s hip-hop.