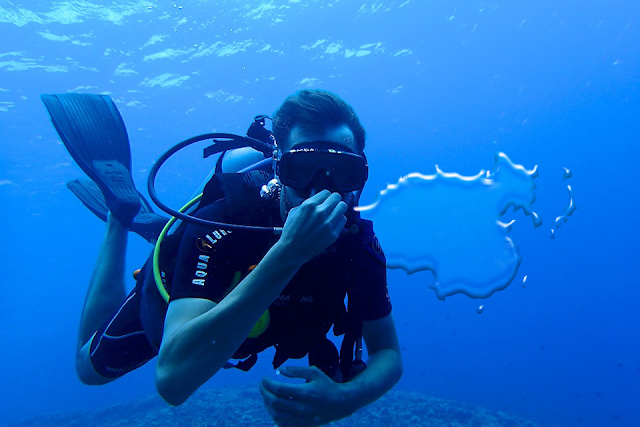 Of the five regions that Asia is divided into, North Asia is easily the least diver-friendly, as it only really incorporates Russia, but East Asia isn’t that hot of a diving destination either. Taiwan and South Korea have a few spots with a mainstream reputation, but places like China and Japan, despite having beautiful coastlines, aren’t as reputable while the landlocked Mongolia and the, erm, inhospitable North Korea don’t even figure.
Don’t worry, I’m not going to advise you to go diving in North Korea, but I will say that this region is actually hiding a lot more amazing diving than people might think, more than enough to make it worth considering travelling a bit further across the continent for your summer getaway than originally planned.
Big Mushroom – Taiwan
The aptly named ‘Big Mushroom’ is reputed to be the oldest coral head in the world, with an estimated age over 1,000 years old. It resides some 150 metres from the coast of Green Island, and a mere 18 metres below the surface. It’s around 30 metres in diameter and 12 metres tall, and it’s a hugely popular congregation site for all manner of small reef fish, but damsels in particular. The mushroom has survived two major impacts from submarines, both times creating big rivets where soft coral now grows. As well as the various reef fish, it’s worth exploring the various hollows in search of lobster, mantis shrimp and moral eels.
Tiger Island – South Korea
Much of South Korea’s coastline is protected from large scale fishing, allowing for a smattering of impressive dive sites. Many of the most popular ones are in the vicinity of Jeju, a large volcanic island on the south coast. There’s a huge, colourful range of soft coral in the water around this island, and Tiger Island (or Bum Sum) is the best place to experience it. Above the water, it’s impossible to miss, a striking formation of rocky archways, and beneath there’s a rainbow of coral, playing host to dozens of different fish species. You’ll see octopus, grouper, lionfish, boxfish and there are sometimes reports of manta ray and dolphin sightings.
Ninepins – Hong Kong
20140909 Ninepin Island Diving, Hong Kong from Tony Lee on Vimeo.
Even without diving it, Ninepins is an essential visit if you happen to be in Hong Kong. The volcanic rock formations are almost comparable to what you see at Giant’s Causeway in Northern Ireland. Beneath the water there is a colourful range of soft and hard coral, as you trace a channel between the north and south islands. You’ll also see the bizarre, amazing whip coral formations and the remains of a massive hulk a bit further out. In terms of fauna, you’ll see scorpionfish, stonefish, urchins, various crustaceans, rays and octopus.
Yonaguni – Japan
The waters around Yonaguni Island in Japan are said to be the third clearest in the world. You won’t see much coral there, mostly steep cliff drop offs, but the clarity of the water and the abundance of marine life make for some truly amazing diving, regardless. Between January and March, you’ll encounter schools of over 100 hammerheads, and throughout the year dogtooth tuna, cuttlefish, sea turtles and barracuda are abundant. In 1987, a bizarre underwater ruin was discovered on the south eastern coast. Their origins are unknown, and it’s not even confirmed if they’re manmade or not, but they are fascinating to explore.
Lion City – China
Qiandao Lake, otherwise known as Thousand Island Lake, is a completely manmade body of water, resulting from the creation of a reservoir and hydroelectric station in 1959. The thing is, though, the valley wasn’t exactly empty when they flooded it. 290,000 people were forced from their homes in various villages, as well as the massive, ancient Lion City. Divers started going down in 2001, and now commercial dives are commonplace. Visibility is poor, lights are necessary, but once you descend into the stony embrace of the dead city, you’re in for one of the most unique, haunting diving experiences in the world. You won’t see any fish, like, at all, but that isn’t really the point of this particular dive.
Callum Davies
Callum is a film school graduate who is now making a name for himself as a journalist and content writer. His vices include flat whites and 90s hip-hop.