Skip to content
There are many different types of erosion, and all of them are at the behest of the climate and other local environmental conditions. It’s a chaotic, uncertain process, and the types of erosion caused by water are particularly unpredictable, and can yield some bizarre natural artwork when the right conditional cocktail is mixed. All over the planet there are examples of this, some famous, some virtually unheard of, but all striking to behold.
The Moeraki Boulders – New Zealand 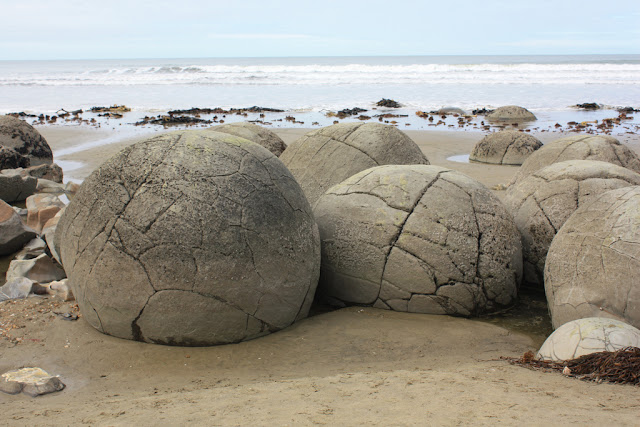 Because of the salt, coastal erosion usually results in very smooth, ordered looking rock formations, depending on what type of stone you’re talking about. This is particularly true of the Moeraki Boulders, but their shape and distribution is so unusual that it completely sets them apart. These big, smooth boulders almost resemble footballs that have been buried in the sand, sitting either in clusters or by themselves across the Otago coast. It’s still debated why they are shaped this way, but it’s thought that they were original formed from the mudstone which cemented the coastal structure during the Palaeocene epoch, slowly brought back to the surface by coastal erosion. A few have cracked open, revealing a core of calcites, quartz and dolomite.
The Stone Forest – China 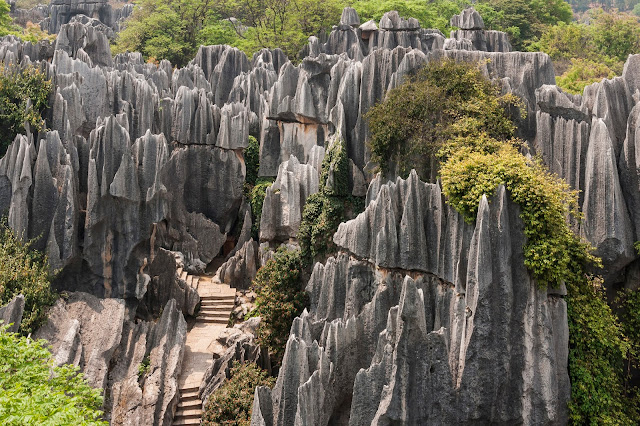 This haunting forest in the Yunnan Province is the source of an ancient legend, which suggested that it had been the birthplace of a beautiful girl who, after being forbidden from marrying her lover, used a stone to create the labyrinth of tall rocky structures that give it its name. In reality, the strange towers, which almost resemble petrified trees, formed around 270 million years ago when a shallow sea stood there. Sandstone deposits were overlaid with limestone, and as uplift occurred exposure to running water (and wind) moulded the stone into narrow shafts. 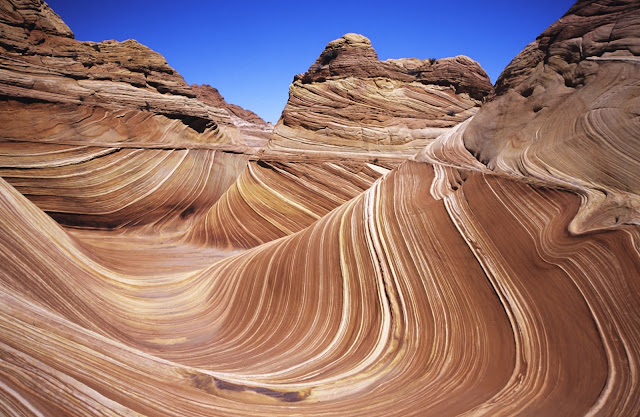 Perhaps it’s just the way my memory works, but this eye-pleasingly neat, ordered rock formation, nestled in the Colorado Plateau always reminds me of Dr Seuss’s Oh, the Places You’ll Go! I would almost think that it was the source of inspiration for those funny, lined hills which feature in the book, were it not for the fact that Seuss probably never set foot in Colorado. During the Jurassic age, sandstone formed across this area and water runoff from above gradually cut the stone into the line formation we see now, with the aid wind erosion, which is still grinding away at it to this day.
Skaftafell – Iceland 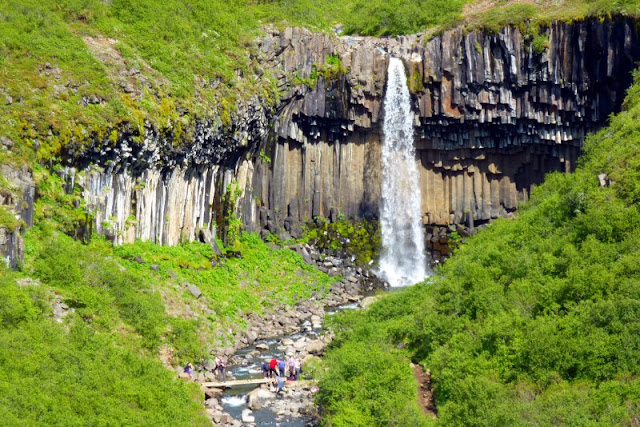 This sizeable preservation area covering 4,807 square kilometres across Iceland’s southeast Öræfasveit region boasts a range of intriguing geological features. Particularly, there are a number of sheer rock walls which have the same kind of cutaway look as Giant’s Causeway or Fingal’s Cave, but in this instance, rivers and glaciers have as much to do with it as volcanic activity. It almost looks as if the rock has been scratched away by some hulked, clawed hand as the centuries have gone by, making way for waterfalls and winding river flows. 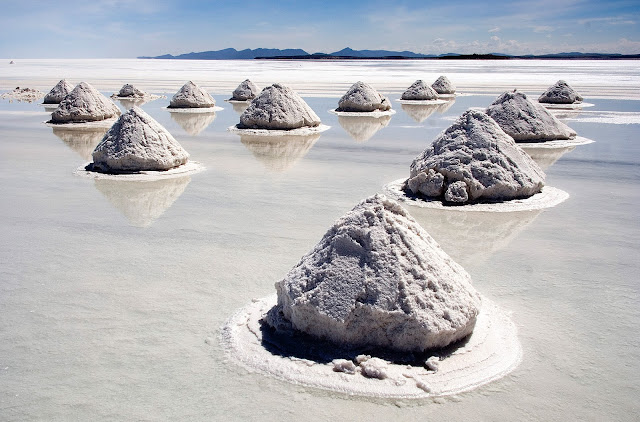 Salar de Uyuni is the largest salt flat on the planet, sitting 3653 metres above sea level in the Bolivian Andes. Once a prehistoric lake, the eventual drying left several different salt pans behind, and caused a series of weird little islands of overwhelmingly bright pure salt. The colouration of the mineral lakes is also particularly striking, a kind of light, sapphire blue which almost looks artificial. The flats hold around 70% of the world’s lithium reserves, so if you get super depressed any time soon, you know where to head. 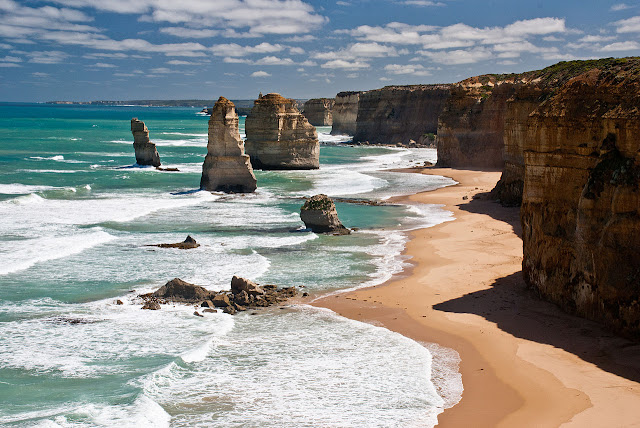 It’s not uncommon to see limestone stacks lining the coast, and some are pretty big, but the Twelve Apostles, which line the Gibson Steps coast in Victoria, are properly big and properly awesome. They have an odd, misshapen structure, some are fatter at the bottom, others are narrower, and you can clearly make out all the sedimentary layers going down to where they meet with the sea. Many of them used to be archways, which have now collapsed, and one went down as recently as 2005. There are actually only 8 apostles left now.

The Caves of Crystals – Mexico 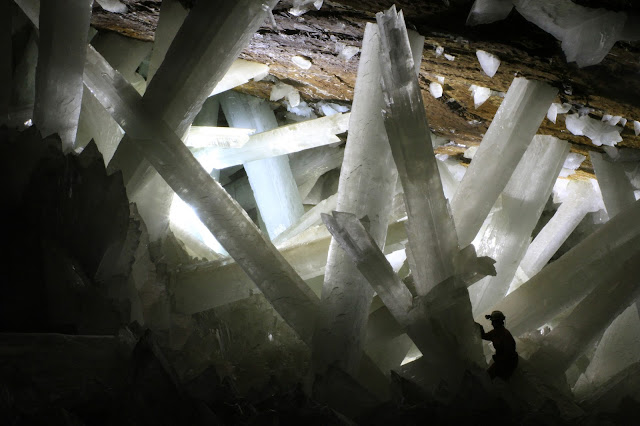 This utterly insane mess of bladed crystals will look familiar to fans of Dark Souls, as some have theorised that it may have even been the inspiration for the infamous Crystal Caves which feature in the game. This massive crystal garden formed beneath the surface of Naica in the Chihuahua region of Mexico. It is a result of magma flows heating up groundwater which was then saturated with sulphide ions. This water then blended with cooler surface water, causing a diffusion reaction which created hydrated sulphates, which then slowly crystalized. The whole process took about half a million years, but the result is quite incredible. You can’t even go inside without special equipment, owing to the sometimes extreme heat and humidity, which can range from 90%-99%. Think about that next time you’re awake on a muggy night. Actually don’t.