One of the most amazing things about technology is that even when you think something has been perfected in design terms, developments in other fields can still be applied. A water bottle is a thing that holds water, we’ve long known the best way to structure them, and for some time it’s been fairly evident which materials are the best.

With those boxes ticked, many companies have elected to design water bottles with outlandish new innovations. Some are terrible, others are utterly nonsensical, but some are fantastic. Here are 6 of the best ones.
Grayl Water Filtration Cup 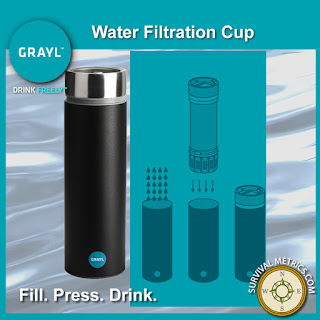 The issue with many home water filters, Britta or otherwise, is that they aren’t exactly portable, or suitable for a single serving. If you want a supply of filtered water to carry around with you, this might be the answer. The Grayl comes in two parts – the outer ‘cup’ and the mesh filter. You fill the cup with water, and then push the mesh filter in and lock it off. This process removes 99.99% of the bacteria present in tap water. The actual filter uses a kind of triple layer effect – an ion-charged mesh to deal with bacteria, a carbon layer to extract metals and chemicals and an anti-microbial layer to stop mould or mildew building up between uses. 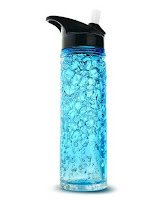 One of the most irritating things about carrying water in the summer is the need to cool it. Freezing it overnight means it’s a pain to carry around, and it’s initially too cold to drink comfortably. Later in the day, once it’s all melted, opposite issue. Simply dumping ice in has the same issue on a smaller scale. The Permafrost Hydra Bottle sidesteps this issue using a layer of refreezable gel. Empty it, leave it in the freeze overnight and suddenly you’ve got a cooling layer which keeps your water cold for hours, and that you can hold in your hand without the cold coming through. 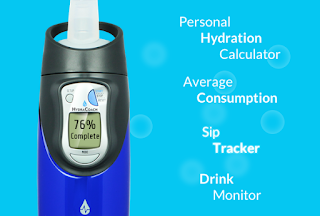 You can read all sorts about exactly how much water you should be drinking, but without a way to actively keep track of it, it’s not a great deal of use. This is where the Hydracoach comes in. You can actually use it to calculate and program your own hydration requirements, shown by a digital heads-up display on the front of the bottle. This way, you always know how much water you’ve had, and how much more you’ll need to meet your daily quota. For people who exercise regularly, this is a serious game changer.

This clever little number is an ideal addition to any hiker/camper’s kit bag. During the day, it absorbs solar power as you’re carrying it around, keeping yourself hydrated, and then at night it transfers all that power into light energy, serving as an LED torch/nightlight. Not only does this mean that you aren’t fumbling around in the dark for your water, but you can also use it to check other things which would usually require a battery powered torch. 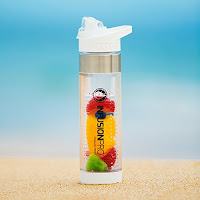 Fruit infusion is the next big thing. Rather than using fruit flavoured powders or syrups, which are packed full of sugar and preservatives, many people have turned to bottles with a compartment for fresh fruit, allowing the natural flavour to seep through to the water without any of the chemical contamination. There are dozens of different ones on the market, but the Infusion Pro tends to be considered as the best. It’s dishwasher safe, resistant to condensation, and the infuser module is on the bottom, allowing the flavour to stay consistent regardless of how much you’ve got left to drink.

OKO Level 2
Gimmicks are one thing, but it’s important to remember that the quality of the water is what you want to be focusing on, and the OKO might be the MacDaddy of them all in this regard. The cap (plastic, but completely BPA free) contains two filters – carbon and electro-absorption. The bottom line is this bottle is so good at filtering water on the go that it can do this.
Add to that a light, easy to carry design and an attractive range of colours and you’re onto something really quite special.
Callum Davies
Callum is a film school graduate who is now making a name for himself as a journalist and content writer. His vices include flat whites and 90s hip-hop.