Most water sports feel fairly developmental in nature. Sailing, rowing, surfing and swimming are all very well established, but beyond that, there’s definitely a prevailing experimental vibe to it all. You’re probably already familiar with sports like kite-boarding, free diving, water polo and jetski racing, but there’s a whole range of bizarre, incredible water sports out there that are still shrouded in obscurity. 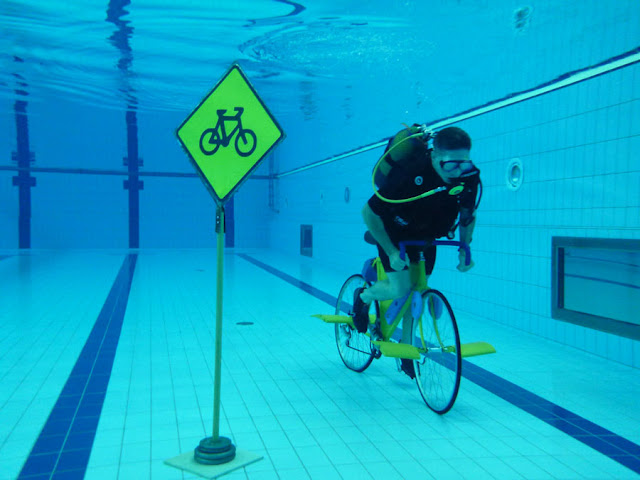 Cycling is a sport that requires balance, proper weight distribution and speed. All of these things are far, far more difficult to achieve when you’re underwater, and yet underwater cycling is very much a thing. Scuba equipment and special, very dense bikes are used. The events are usually structured as a straight race to the finish line, with no more than 10 combatants. The course is usually a half-mile, and riders aren’t allowed to dismount (which I suppose is just floating away) or interfere with their opponents.
Underwater Rugby 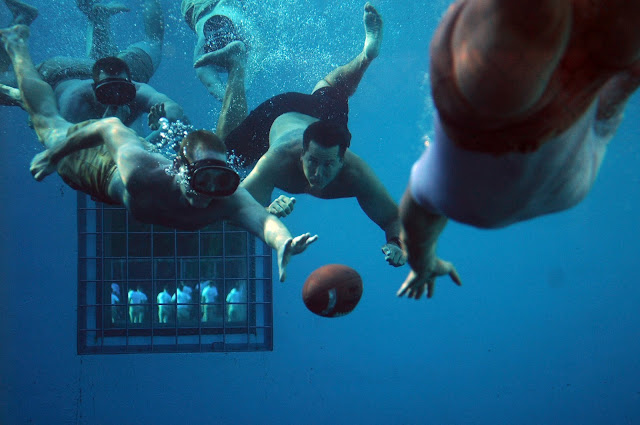 Underwater hockey is a fairly well established sport, weird as it is, but underwater rugby has yet to break out in quite the same way. It’s actually been around since the 1960s, and was recognised as an aquatic sport in 1978. The first world championships were 2 years later. It’s played at a depth of 3-5 metres, as two teams of six try to get a ball (filled with saltwater to make it negatively buoyant) into a metal bucket. The ball can be passed forward or back, but never leave the water. It’s a fast paced, energetic sport. To date there have been 10 world championships, which Sweden have largely dominated in both the men and women’s leagues. Norway and Germany are the current reigning champions for men and women respectively.
Picigin 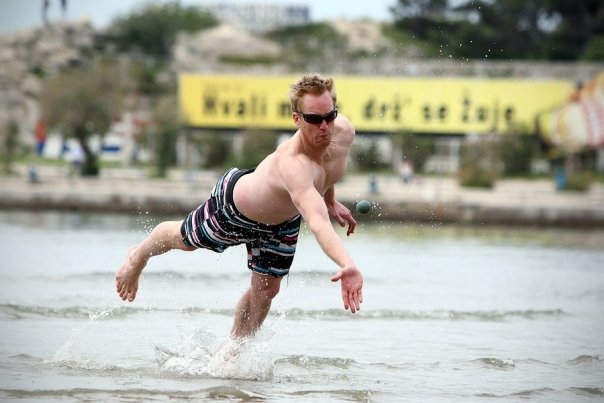 If you haven’t heard of Picigin, it’s probably because you’re not from Croatia. It was developed there in the coastal city of Split in 1908, and it’s been going strong ever since. It’s basically a competitive cross pollination of hacky sack, volleyball and keepie uppie, played in ankle-deep water on the beach. Players aren’t allowed to catch the ball, but rather bounce it with the palm of the hand. Typically, it’s played by 5 people, but this can vary, and it’s almost always played in a casual climate. Since 2005, however, there have been world championships, judged by the artistic, acrobatic performance of each individual team.
Aquathlon 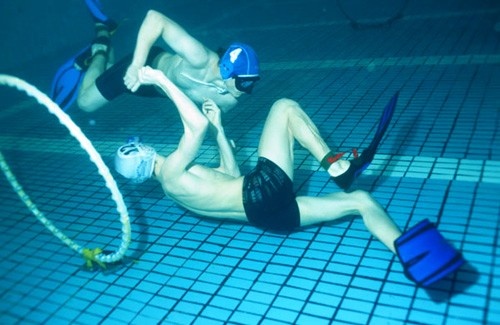 You might think, given the name, that aquathlon would be a kind of water based biathlon or triathlon, and there is a version of that, but the original version is actually a form of underwater wrestling. It was developed in Russia, and the first championships were held in Moscow in 1982. Basically, two wrestlers, clad in flippers and masks, have to battle it out to try and remove a ribbon from the other’s ankle. Each round lasts 30 seconds, and there are 3, with a 4th in the event of a tie. It’s an extremely fast-paced sport, largely based around grappling and trying to keep your opponent from reaching the surface. It’s now played across much of Russia and Eastern Europe.
Underwater Target Shooting 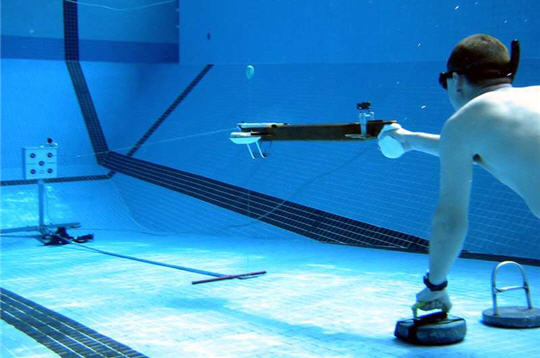 No, they don’t use actual guns, obviously. Underwater target shooting is probably the least violent sport undertaken with the use of a speargun, after spearfishing and Vargas murdering. It was developed in France, again during the early 80s (post-Cold War boredom, I guess). There are two different kinds of contest, one for individuals and one for teams. For solo shooters, there’s a precision contest, where the diver swims to the shooting line, fires, retrieves the spear and repeats for 5 minutes or 10 shots, whichever comes first. The biathlon version is identical in everything, except that they aren’t allowed to take a breath until they’ve taken the spear back to the starting line. The team version, relay, is the same as Biathlon but with teams of 3, this time firing 9 shots in a 4 and a half minute time limit.